Start a musical quest with your Fuyomin!

Fuyomin is the spirit of a musical instrument contained in an animal. With your Fuyomin, you enter Solfege Academy and start your quest to become the world’s best Fuyomin-trainer. This is an educational role-playing game which can be enjoyed by both adults and children while learning to read music.

Located at the eastern end of the world, the Solfege Kingdom was wealthy, peaceful, and prosperous, protected by the mighty magic of the Queen. However, monsters started to appear around the Kingdom on a stormy night and began attacking people. Rumors have spread all over the Kingdom that someone has stolen the magic stones, the source of Queen’s magical power. Monsters often appear on the eastern prairie, and animals have also started to become violent and to attack people. Travelers have been attacked and grazing has become impossible. The mayor of east village, which is completely stymied, asked you to get rid of the monsters on the prairie …

First, visit a breeder with 100,000 gold and choose your first Fuyomin. Adorable Fuyomin such as dogs, cats, and rabbits are waiting for you.

You will use a musical score to charge your Fuyomin in battle. Before that, you need to study a musical score at Solfege Academy. The teachers in the academy kindly teach you how to read musical scores. You should study hard to obtain a musical score, which is granted after passing an examination.

You can get items which are helpful for your quest. Food can temporarily enhance your Fuyomin’s strength, defense, and agility. Potions can heal your Fuyomin’s wounds or increase its health points. In addition, you can get bonus items for free by watching ads.

Finally, you can start your quest. Defeat violent monsters with musical note attacks by your Fuyomin. By playing your musical score, you can charge your Fuyomin with the notes to attack the monsters. The power of musical notes decreases according to the number of mistakes you have made. Be aware that the notes will be destroyed if you make three mistakes. After defeating all monsters, you can complete the quest to get experience points and gold.

You can increase your Fuyomin’s level according to the experience points that you have collected. In addition, the more varieties of pitches you master, the higher your level of music reading becomes. Increase both your and your Fuyomin’s level through various quests and defeat more evil monsters! 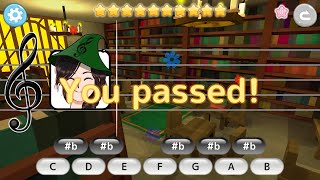 How to study a musical score at Solfege Academy 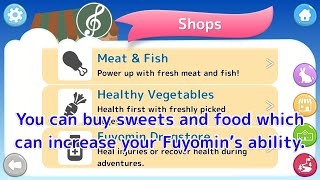 How to use items 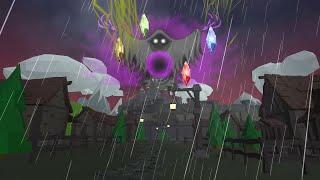 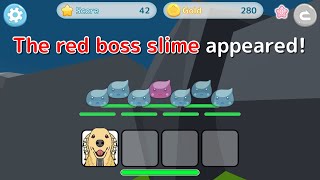 How to study a musical score at Solfege Academy

You will use a musical score to charge your Fuyomin in battle. Before that, you need to study a musical score at Solfege Academy. The teachers in the academy kindly teach you how to read musical scores. You should study hard to obtain a musical score, which is granted after passing an examination.

How to use items

You can buy various items which are useful for your quest. Food can improve your Fuyomin’s strength, defense, or agility. Potions can recover your Fuyomin’s health.

Located at the eastern end of the world, the Solfege Kingdom was wealthy, peaceful, and prosperous, protected by the mighty magic of the Queen. However, monsters started to appear around the Kingdom on a stormy night and began attacking people ...

There is a large outbreak of slimes on the prairie! Defeat the red slime, which is the boss, and end the outbreak. The mayor has placed a bounty on the extermination of the boss.

How to learn musical scores

Study hard and aim to achieve the passing score set by the teacher. In addition, the teacher may give you special items as a reward for your efforts.

How to buy and use items

Potions are placed on the left of the screen. You can recover your Fuyomin’s health by giving them before encountering monsters.

How to start a quest

Are you ready? Let’s go on a quest! A battle begins when you encounter monsters. Charge musical notes to your Fuyomin by playing your musical score, which you learned at school. The more accurately you play, the more damage the monsters suffer.
The green bar below your Fuyomin shows its health points. If the bar becomes totally red, you lose your Fuyomin’s health and the quest is over. The monsters have the same bars, so continue to attack until their bars become totally red.

When you complete a quest, you will get gold and experience points. In addition, you may regain treasure which monsters have stolen. Level up your Fuyomin by getting experience points over the criteria defined in each level.
Please note that some quests may require you to play more difficult musical scores.

Based on the accuracy when you play during quests, the level of your music reading is certified. The level starts from bronze, then silver, gold, and platinum. Note that your Fuyomin’s abilities increase according to this level. Aim to become the best music reader to restore peace to the world!

This is how to play the music reading roll playing game, FUYOMIN. Enjoy quests with your Fuyomin and level up your music reading skills too!

This website uses cookies to improve your experience while you navigate through the website. Out of these, the cookies that are categorized as necessary are stored on your browser as they are essential for the working of basic functionalities of the website. We also use third-party cookies that help us analyze and understand how you use this website. These cookies will be stored in your browser only with your consent. You also have the option to opt-out of these cookies. But opting out of some of these cookies may affect your browsing experience.
Necessary Always Enabled
Necessary cookies are absolutely essential for the website to function properly. This category only includes cookies that ensures basic functionalities and security features of the website. These cookies do not store any personal information.
Non-necessary
Any cookies that may not be particularly necessary for the website to function and is used specifically to collect user personal data via analytics, ads, other embedded contents are termed as non-necessary cookies. It is mandatory to procure user consent prior to running these cookies on your website.
SAVE & ACCEPT
PAGE TOP